Blepharitis is a chronic inflammation of the eyelids which causes irritation, itching, and occasionally a red eye. The eyelids are composed of skin on the outside and mucous membranes on the inside. A cartilage-like plate, muscles, and glands are sandwiched in between. Blepharitis can begin in early childhood producing “granulated eyelids,” and may continue throughout life as a chronic condition or it may develop in later life. It may appear in one of two ways: 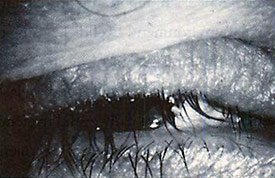 Seboorheic Blepharitis is characterized by redness of the lids, scales and flaking around the eyelashes. It is often associated with dandruff of the scalp

Ulcerative Blepharitis is usually a more severe condition caused by bacteria and is characterized by matted hard crusts around the eyelashes which upon removal leave small ulcers that may bleed or ooze. The white part of the eye may turn red. In severe cases, the cornea (the clear front window of the eye) may become inflamed.

There may be a loss of eyelashes and distortion of the margins of the eyelids, which can cause chronic tearing.

Blepharitis (Blef-ar-eye-tiss) is a general medical term used to describe inflammation of the eyelids.

The most common cause of blepharitis is bacterial infection, although it may also be caused by allergies or viral infection

Sometimes the inflammation may spread to the glands of the eyelid, or it may involve the surface of the eye itself, causing the white of the eye to become reddened (conjunctivitis).

Often, blepharitis is accompanied by an oily discharge which leaves a crusty residue and/ or scales on the eyelids.

The eyelids may be stuck shut upon awakening in the morning. If the eyelids are not cleaned properly, infectious micro-organisms can grow in the oily debris and buildup, and complications may develop.

Your health care practitioner can recommend a proper eye-lid hygiene regimen to keep your eyes free from harmful bacteria.

All pages in the Medical Eye Conditions Library section from the Toronto Eye Clinic are available in PDF format.
Click Here to access the PDF resource page.